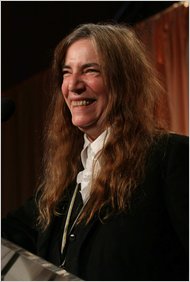 Patti Smith won the nonfiction award on Wednesday for her memoir of her relationship with Robert Mapplethorpe.

The rock musician Patti Smith won the National Book Award for nonfiction on Wednesday night for “Just Kids,” a sweetly evocative memoir of her relationship with the artist Robert Mapplethorpe and life in the bohemian New York of the 1960s and ’70s.

Accepting the award to applause and cheers, Ms. Smith — clearly the favorite of the night — choked up as she recalled her days as a clerk in the Scribner’s bookstore in Manhattan.

“I dreamed of having a book of my own, of writing one that I could put on a shelf,” she said. “Please, no matter how we advance technologically, please don’t abandon the book. There is nothing in our material world more beautiful than the book.” “Just Kids” was published by Ecco, an imprint of HarperCollins.

In the fiction category, Jaimy Gordon won for “Lord of Misrule,” a surprise pick for a book published by McPherson & Company, a small literary publisher in Kingston, N.Y. The novel, about the ruthless world of horse racing in West Virginia, was praised by the judges as a “vivid, memorable and linguistically rich novel.”

More than 650 guests, about 10 more than last year, attended the ceremony for the awards, now in their 61st year, at Cipriani Wall Street in Manhattan. Tables cost $12,000.

The winners received a check for $10,000 and a bronze statue. An increase in sales often follows.

In a well-worn tradition, the list of finalists inspired some grumbling from publishing insiders who objected that the choices were too obscure. Most notably, Jonathan Franzen’s novel “Freedom,” which was a literary sensation and best seller this year, did not make the cut.

A new set of judges chooses the finalists each year, meeting as a group for the first time over lunch on the day of the event to pick the winners.

This year’s list was notable for its unusually high number of women. Of the 20 finalists, 13 were women, a record.

The award for young people’s literature went to Kathryn Erskine, a lawyer-turned-writer, for “Mockingbird,” the story of an 11-year-old girl’s struggle with Asperger syndrome. It was published by Philomel Books, a division of the Penguin Young Readers Group.

The award for poetry went to Terrance Hayes for “Lighthead,” a collection published by Viking Penguin. His victory was unanimous, with the judges citing its “dazzling mixture of wisdom and lyric innovation.”

For the second year in a row, Andy Borowitz, a writer and comedian, hosted the event, a black-tie dinner.

He opened his remarks with the death-of-print jokes that have been a staple at publishing gatherings since the birth of e-books.

“I said last year that publishing was a sinking ship,” Mr. Borowitz said. “I believe that publishing is still very much in the process of sinking. Publishing is a Carnival cruise ship. It’s on fire, the toilets don’t work, but we are surviving day to day on Pop-Tarts and Spam.”

Tom Wolfe received the 2010 Medal for Distinguished Contribution to American Letters, and gave a long speech about his adventures in newspaper journalism, in the process dropping the names of Leonard Bernstein, Robert Lowell and David Halberstam.

Joan Ganz Cooney, a public television producer and founder of the Children’s Television Workshop in 1968, won the 2010 Literarian Award for Outstanding Service to the American Literary Community.

In her remarks, Ms. Ganz Cooney said one of the biggest challenges in the book industry was making sure that children can benefit from digital technology.

“We’ve worked to make sure that games do not crowd out books for young children,” she said. “So far, so good.”