Playwright Sir David Hare has been awarded this year’s Pen/Pinter Prize, it has been announced. 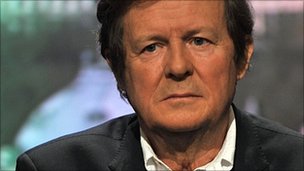 Sir David is known for his gritty portrayals of contemporary Britain

The award, set up by the writers’ charity Pen in memory of playwright Harold Pinter, is given to a British writer who casts an “unflinching, unswerving” gaze upon the world.

He will be presented with his prize on 10 October at the British Library.

The award will be shared with an imprisoned “writer of courage” who has been persecuted for speaking out about their beliefs, to be announced at the event.

Lady Antonia said: “In the course of his long, distinguished career, David Hare has never failed to speak out fearlessly on the subject of politics in the broadest sense.

“This courage, combined with his rich creative talent, makes him a worthy winner of the Pen/Pinter Prize”.

Known for his gritty portrayals of contemporary Britain, Sir David’s notable works include Plenty, a portrait of disillusionment in post-war Britain, and The Absence of War, a drama about the Labour Party.