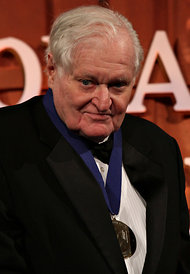 The poet John Ashbery was honored for his lifetime of work.

A novel about a Mississippi family confronting Hurricane Katrina has won the US National Book Award for fiction.

The judges praised Jesmyn Ward’s Salvage the Bones for its use of “piercing metaphor and simile”.

Nikky Finney’s Head Off and Split took the poetry prize, while Thanhha Lai’s Inside Out and Back Again won the award for young people’s literature.

Stephen Greenblatt’s The Swerve, about Latin poet Lucretius, triumphed in the non-fiction category. 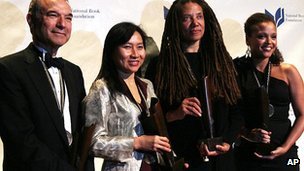 In her acceptance speech, Ward said the death of her younger brother – who was hit by a drunk driver when she was in college – had inspired her to become a writer.

She said she realised life was a “feeble, unpredictable thing,” but that books were a testament of strength in the face of a punishing world.

Greenblatt, tearful in victory, noted the miracle of words in making an ancient poet such as Lucretius matter so greatly centuries later.

Actor John Lithgow, the show’s host, called it “the best acceptance speech for anything that I’ve heard in my entire life”.

The awards were hit by controversy last month when the nominees were first announced and author Lauren Myracle mistakenly appeared on the shortlist, in the young people’s literature category, for her book Shine.

The book was withdrawn after the National Book Foundation cited a “miscommunication”. It appeared Myracle’s book had been confused with Franny Billingsley’s similar-sounding novel Chime.

Shortly after, the Foundation welcomed Shine back into the category “based on its merits”, but Myracle was asked to withdraw a number of days later “to preserve the integrity of the award”, the author said.